What Do Bibles Tell Us About Vermonters?

What Do Bibles Tell Us About Vermonters?

We now have nine Bibles and a New Testament on display on the second floor of the Vermont History Center, ranging in date from 1698 to 1862 and in size from 2.25 inches to 11 inches tall. Bibles are often repositories for family history and sometimes served as enclosures that preserved artifacts and documents—shedding light on the activities of the day and what Vermonters deemed important. 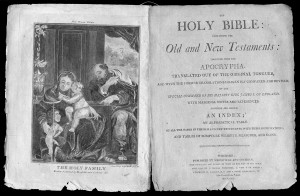 The first full-length Bible printed in Vermont was published in 1812 by Merrifield & Cochran of Windsor. Known as “the Vermont Bible,” it was issued in three different versions, two with plates engraved by noted artist Isaac Eddy of Weathersfield, Vermont, and one without illustrations—we have one of each.

Most Vermont Bibles were printed in Brattleboro and Woodstock. John Holbrook, a pioneering publisher from Brattleboro, first published a Bible from stereotype plates he purchased in 1815, just one year after the process was first used to publish a Bible in the United States. In an advertisement from the period, Holbrook boasted, “As a standard work, and in point of beauty and neatness, nothing is before it in this country.” He went on to opine that his Bible would be “so low in price it would be within the means of every one.”

The earliest Bible in our exhibit was printed in London in 1698 and was inscribed to Samuel Robinson of Bennington. Robinson was appointed by Governor Benning Wentworth as the first justice of the peace in the New Hampshire Grants. In 1766, Robinson was sent to London to present the case of the New Hampshire Grant settlers to the Crown. Robinson died of smallpox in London in 1767, and the Bible was handed down to his children and grandchildren.

An 1862 New Testament on display belonged to Charles W. Ross of Starksboro, Vermont, Company G, 14th Vermont Infantry Regiment. Ross was killed during the Battle of Gettysburg and the New Testament was found clutched in his hand. Clearly, this Bible meant a great deal to Ross.

As part of our ongoing effort to computerize the library’s catalog, 46 editions of the Bible can now be found in our online catalog. This significant effort took careful study of the volumes to distinguish editions and not include duplicates. Today, our library collects only unique Bibles printed in Vermont that are not already in our collections. We also collect important family information removed from Bibles, not the actual Bibles.