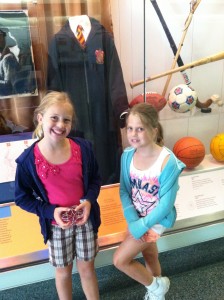 Tyler (right) and her sister Ryan with Harry Potter’s robe at the Smithsonian.

This post is the second from my in-house (literally) focus group, this from my nine-year-old daughter Tyler. Unlike her big sister who is a budding history geek just like myself (her post is here), Tyler needs a bit more action in her learning and rarely hesitates to let us know when she’s grown tired of a museum experience.

That being said, it was enlightening for me to have this conversation with her. I knew she enjoyed the family time at museums but didn’t quite realize how much she actually liked museums themselves. It’s clear to me that she does like museums but is rather specific in her tastes.

I hope this offers some good food-for-thought.

What do you like when you go to museums?

I really like people who let you take your time and not tour guides who make you go fast and rush you because then you miss things like interesting old things or pictures.

I really like movies, slide shows, and old pictures at the beginning because they tell you more about what you’re going to learn. The one in the Rosa Parks Museum was one of my favorites because it felt like you were really there when she was arrested. You could see a bus and then see and hear what was going on. It made me feel like I was actually there which was really cool because I had learned about it when I was in school. (Note from me: she’s talking about their very powerful intro movie using a bus from that era.)

I also like things you can touch because you get the feel of things and you know what people held or used in the past. I also like doing scavenger hunts because I like to fill things out and it helps me experience the exhibit like the Girl Scout exhibit at the Tennessee State Museum.

Of course I like gift shops. I like things that are like what I actually saw and learned. Like books or copies of old things. I always ask you and Mommy to buy me a hat (note from Daddy: which she typically only wears on that particular trip).

What bores you or doesn’t interest you that much at museums?

Tour guides that rush me. I also don’t like it when tour guides don’t ask questions or talk only to the grownups or talk too long. Eventually I get bored when we’re just standing around and I don’t really understand what they’re saying.

I don’t like it when there’s too much to read. I prefer to see old things or listen, like the iPod tour at the Freedom Center because it showed you pictures and words as you moved around the museum.

I also don’t like it when I want to go to a particular exhibit or place in a museum and you and Mommy are talking to the guide or someone and making us wait. Because you guys keep saying “One minute” and I want to go somewhere else. But it was cool when we went to the Martin Luther King Jr. site gift shop because while you were talking too long to the people they were showing a movie and I learned a lot after I got bored looking at the stuff in the shop.

What are some of your favorite memories of museums/historic sites?

I really liked going to the Museum of Alabama with my cousins because your friend who took us around (note: that was Steve Murray, the director there) was really nice and he let us take our time and we could go back to things we liked like the dress up area they had.

I also liked the City Museum in St. Louis. I loved the slinky crawly thing and the slide made of soup cans. That was a fun museum. It seemed like kids made it up with so many things to climb on and play in: skate board ramps, tree house, tunnels to other rooms. 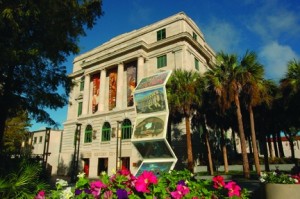 And I also love your old museum in Orlando, The History Center. One reason is because you worked there and it always had such cool stuff in it. I remember one visit where they had a Muppet exhibit. That was fun. I saw Animal and Rowlf the Dog.

I loved going to Washington, DC museums particularly the Smithsonian with things like Harry Potter’s robe from his first year at Hogwarts, Lincoln’s Hat, and Kermit the Frog—but I wondered why Miss Piggy wasn’t there too.

What is your favorite thing about visiting museums?

Because you get to see cool things and things from the past and it helps me learn more about some things I might have read about or learned about in school. The Rosa Parks Museum is like this. I read about Rosa Parks in Scholastic News but it was short. The museum helped me learn so much more.

I also like museums because we spend time as a family. Sometimes I really like it when there’s no tour guide and you and Mommy explain things to me.

What are some things you’d say about how to make visits more fun for you?

You should put out more artifacts that are things that kids used like old jump ropes or old balls and things. I don’t have to touch them or use them, I could just see them or see them in use like a movie or a picture. That’s cool for me to see how things have turned out. A lot of museums show things like old plates and such and it’s just more fun to see things that kids used.

Always have someone who can answer questions like a tour guide or someone. But they need to be people who have kids or know how to talk to kids and know the kind of things kids like. And dress up and play areas with things are cool.

So that’s my second internal focus group interview. What did I learn that you might put into practice and/or might keep in mind?