For many corporate museums and archives, it is tough to change the historic narrative of the company. Marketing is involved, as well as long-held traditions and myths. The Jack Daniel’s Distillery in Lynchburg, TN, has decided to add a new element to the story of the founding of their legendary whiskey company and their efforts made the New York Times this week:

This year is the 150th anniversary of Jack Daniel’s, and the distillery, home to one of the world’s best-selling whiskeys, is using the occasion to tell a different, more complicated tale. Daniel, the company now says, didn’t learn distilling from Dan Call, but from a man named Nearis Green — one of Call’s slaves…

In deciding to talk about Green, Jack Daniel’s may be hoping to get ahead of a collision between the growing popularity of American whiskey among younger drinkers and a heightened awareness of the hidden racial politics behind America’s culinary heritage. 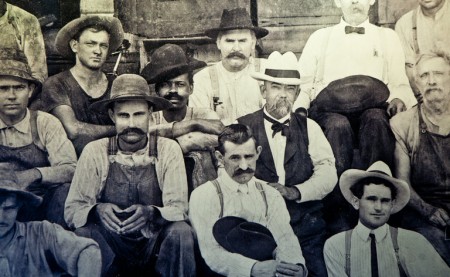 In a photo in Jack Daniel’s old office, Daniel, with mustache and white hat, is shown at his distillery in Tennessee in the late 1800s. The man to his right could be a son of Nearis Green, a slave who helped teach Daniel how to make whiskey.

How can your corporate archives or museum tell a new story? What are your challenges or opportunities? We would love to hear from you. Email Amber Mitchell at [email protected] if you would like to write a blog about how your corporation changed your interpretation to include more diverse stories.

March 28th, 2018
Brand History and Authenticity: The Archive at Carhartt

Brand History and Authenticity: The Archive at Carhartt