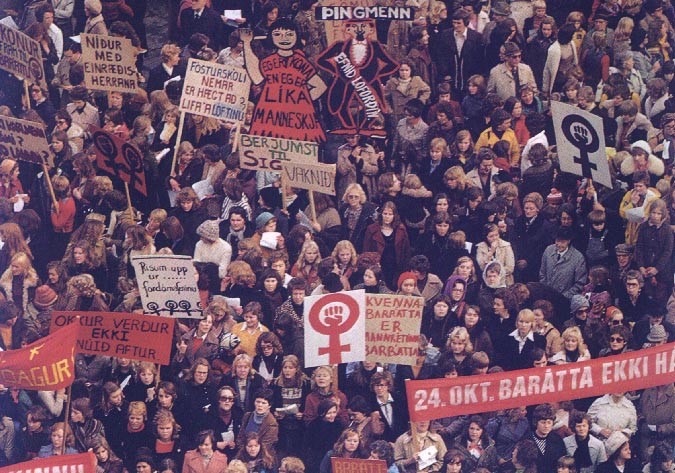 Photo from the Women’s Day Off on October 24, 1975, when 95% of all Icelandic women walked out of work and home to protest inequality in wages and job opportunities.

When I agreed to write about women’s history in Iceland for this blog, I’ll admit I didn’t really know too much about the subject. I did my master’s in medieval Icelandic history and literature, and it’s probably not a big surprise to anyone that women are mostly footnotes and supporting characters in medieval history. But I did know where to go to get the information I needed.

I’m on a Fulbright Fellowship in Iceland until May, and lately, I’ve been spending most days in the National and University Library here in Reykjavik, trying to master Icelandic grammar and editing a podcast about Icelandic museums, Museums in Strange Places. It just so happens that two floors below my usual study spot is the Kvennasögusafn Íslands, the Women’s History Archive in Iceland. The archive is a one-woman operation run by Rakel Adolphsdóttir, a young historian and feminist activist. She told me about key moments in Icelandic women’s history, and we discussed what was unique about women’s history in Iceland as well as the universal challenges. After our conversation, Rakel* connected me with the three researchers behind Hinsegin Huldkonur (Hidden Queer Women), a project to find the queer women in Icelandic sources from 1700-1960 and create a new database of queer women’s history in Iceland.

(*Icelanders don’t have surnames, just patronymics, or names derived from a father or another ancestor, so they are always referred to by their first name.)

The subject fit so well into the theme of my podcast that I decided to do a special episode about women’s history in Iceland. You can listen to the episode on the player below or on Apple Podcasts, RadioPublic, Stitcher, and wherever else you get your podcasts.

Iceland is a particularly interesting place to study women’s history. It’s often called one of the best places in the world to be a woman, and has been ranked #1 in the World Economic Forum’s gender equality index for nine years now. In January of this year, Iceland became the first country in the world to require employers to prove they are paying women equally.

But, as with every country, there is still work to be done towards the goal of full equality, and not all women are equally represented in Iceland’s progress. The #metoo movement has helped show that Iceland still has a systematic imbalance of power between the sexes. Just this year, a large group of foreign women in Iceland started organizing to highlight their experiences of gender-based discrimination and advocate for change. And of course, trans-women are still fighting for full rights and acceptance in the legal system and society at large.

Women’s History is Relevant in Iceland

During both my interview with Rakel and the women working on the Hinsegin Huldkonur project, Ásta Kristín Benediktsdóttir and Íris Ellenberger, I was struck by the way contemporary issues and activism informed their historical research and vice versa. When I asked Rakel about the future of women’s history in Iceland, her first thought was not the future of an academic field; she instead shared her thoughts on the state of equality and activism today.

I could see that this interconnectedness of past and present informed Rakel’s work at the Women’s History Archive as well. The Archive was started by feminist activists and librarians in 1975, and was housed in the home of one of its founders, Anna Sigurðardóttir, until 1996, when it became a part of the National Library. From the start, the Archive had the support of Iceland’s women’s associations, and today the relationship between the Archive and women’s groups is still a central part of the Archive’s work.

Doing public history in Iceland is unique because the entire country only has about 330,000 people, making it easier to identify gaps in records, find relatives, and connect with people that may have papers that should be in the archive. Ásta told me that one of the advantages she brings to the queer women’s history project is that she has a huge network of women that she can talk to about recent history. There might be a bit of so-called gossip that they wouldn’t think she’d find interesting, but by spending time talking to these women, she often uncovers a clue that will lead to more research on women that lived outside the gender norms of their time.

While there is a broad consciousness that more attention must be paid to women’s history, there is still a long ways to go. Rakel told me that only 12-20% of document’s in Iceland’s archives are by or about women. And of the documents by or about women collected since the national archives were founded in 1888, there is a strong male bias in the catalogs; in the past, catalogers have left out mentions of women and only listed men referenced in the documents, making it difficult to for all but the most dedicated researchers to find these hidden women.

And when it comes to collecting, researching, and sharing queer women’s history in Iceland, the work has just begun. What research has been done on queer history in Iceland has focused mainly on men, and so the Hinsegin Hulkonur project is trying to collect queer women’s history to give researchers, teachers, and students interested in doing this work somewhere to start.

The first step now, both for Rakel at the Women’s History Archive and for the researchers with the Hidden Queer Women project is to find these records within the existing archives, collect more documents created by and about women and queer women, and make the collections available and accessible for researchers and teachers searching for sources about women’s history.

Both the Women’s History Archive and the Hinsegin Huldkonur project are looking back over a male-dominated historical record to find the women whose lives and stories are hidden in archival collections and in undiscovered attic boxes. Of course, this work of refocusing our historical awareness and filling in the archival gaps is not unique to Iceland. This same work is being done by professional and amateur public historians all over the U.S. who realize that equal representation in historical research cannot move forward without primary sources. Filling in the gaps in our collections and archives lays a foundation of historical knowledge for researchers and writers from middle school to the academy to build upon.

You don’t have to look very long to find examples of this kind of work being done in America:

Women singing at the 1975 Women’s Day Off protest in Reykjavík.

1907: Women’s Rights Association founded by Iceland’s most famous suffragette, Bríet Bjarnhéðinsdóttir. This creates a network of women that goes on to make great gains towards equal representation in government and progress on women’s issues over the next century.

1915: Women over the age of 40 gain national suffrage and the right to hold office. There was a big celebration of the 100 year anniversary of this victory in 2015. I was living in Iceland at the time, and it was so inspiring to see artwork, exhibits, and events all over Reykjavík celebrating this history.

1920: All women gain national suffrage and the right to hold office.

1975: The Women’s Day Off takes place with 95% of all Icelandic women walking out of work and home at 2pm on October 24 to protest inequality in wages and job opportunities.

1980: Iceland elects Vigdís Finnbogadóttir as president. She becomes the first female president of Iceland and the first democratically elected female president in the world. She was a single mother, having become the first single woman in Iceland to get legal permission to adopt. She was also a breast cancer survivor, and when her male opponent, who was favored to win, asked her how she was going to be president with just one breast, she replied, “Well, I’m not going to be breastfeeding the nation.” This iconic reply helped rally voters and she won by a small margin. She was re-elected another three times, serving for a total of sixteen years, which makes her still to this day the longest-serving elected female head of state in the world.

2009: Iceland elects its first female prime minster, Jóhanna Sigurðardóttir. Jóhanna was also the world’s first openly gay head of government. The national government has an equal representation of women and men for the first time in history.

2010: Same-sex marriage is legalized in Iceland.

More on Women’s History in Iceland