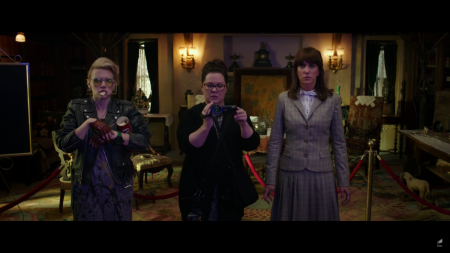 The 2016 Ghostbusters reboot begins with an actual ghost causing problems after a docent finishes a tour at a “haunted” historic house museums.

Many museums and historic preservation groups have been unsure how to react to the growing popularity of commercial ghost tours over the past twenty years.  Some museums have tried to avoid any connection to what they perceive as inaccurate, theatrical, or just sensational uses of history. Others have embraced the idea and offer their own versions of ghost and cemetery tours as part of their historical interpretation. How should museums react to public interest in these tours and how can their appeal help museums understand the needs and expectations of audiences?

What might have been a once-a-year Halloween special event has developed into a burgeoning heritage industry, with many communities advertising themselves as the most haunted city or town. Ghost Tours of Philadelphia advertises that, “We bring history back to life.” Ghost tour companies in Lancaster, Pennsylvania; Cape May, New Jersey; Baltimore, Maryland; New Orleans, Louisiana; Boston and Salem, Massachusetts; Charleston, South Carolina; Savannah, Georgia; and Colonial Williamsburg, Virginia are only some of the places that you will find in an online search for ghost tours. 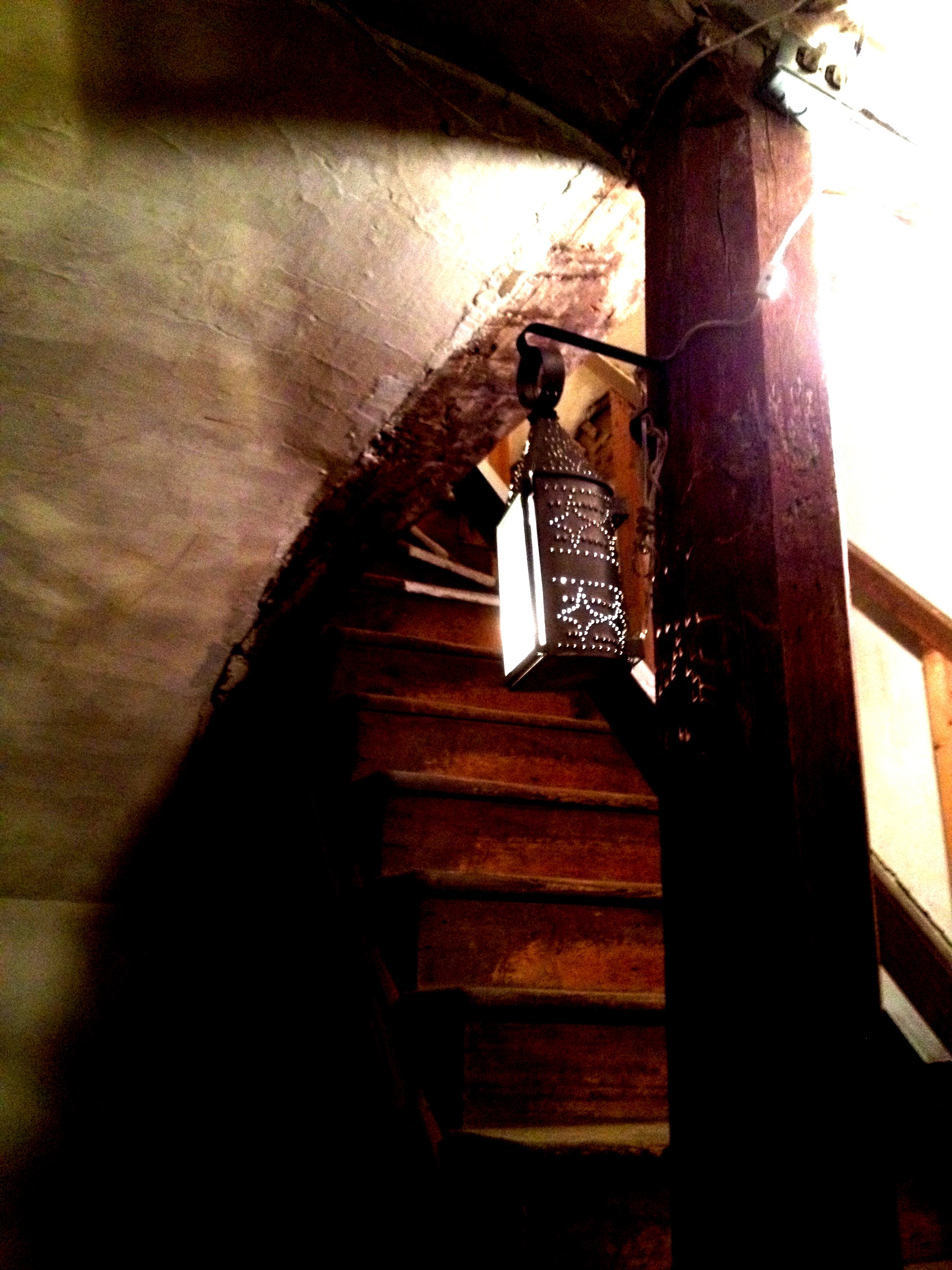 Spiritualism has a long history in European and American cultures. Many nineteenth-century authors, intellectuals and reformers, many of them women, found spiritualism attractive. Arthur Conan Doyle, Harriet Beecher Stowe and Lydia Maria Child were all involved in the spiritualism movements of the nineteenth century. The current ghost tour companies across the country generally date back about twenty years.  How can we explain this increased interest in ghost tours in the 1990s?

The first Ghostbusters movie was released in 1984. Parapsychology, although generally not embraced by the scientific community, is studied at a number of universities, including the University of Virginia’s Division of Perceptual Studies. Paranormal television programs have developed as a sub-genre of reality television that presents supposedly scientific investigations of paranormal phenomena, as opposed to purely fictional representations. The 1990s saw an increase in this type of programming with History’s Mysteries (1998-2006) and Haunted History (1998-2008) on the History Channel and Ancient Mysteries (1994-1998) on A& E. Listings of paranormal television programs show a decided uptick from 2000 to the present.

Nowhere is interest in paranormal history more prevalent than Gettysburg, Pennsylvania, where the standard battlefield tours have been joined by ghost tours designed to attract tourist audiences. As the site of so much death and dying, the Gettysburg battlefield, and the surrounding houses and farms that cared for the wounded, draw visitors seeking to make a connection to this historic and possibly haunted place.

In the summer of 2012, Pamela Cooper-White began a study of Gettysburg’s ghost tours. She interviewed scholars, and attended ghost tours and investigations as a participant observer, as she described herself.  A professor of psychology and religion at Union Theological Seminary in New York City, and author of Braided Selves: Collected Essays on Multiplicity, God, and Persons, Cooper-White set out to conduct a cultural analysis to determine, “what draws people to these experiences, and what cultural and/or spiritual findings might be found in them?” (Cooper-White 34.) Her findings have been  published as “Haunted Histories: A Cultural Study of the Gettysburg Ghost Trade,” in Gettysburg: The Quest for Meaning by the Seminary Ridge Press in 2015. 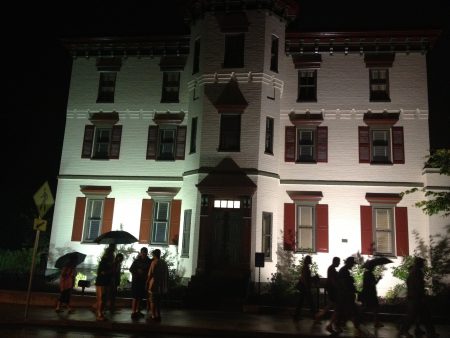 Scene from ghost tour taken in 2012. Photo by Pamela Cooper-White.

The ghost tours in Gettysburg began in 1994 when a former National Park Service ranger and author of a book on Gettysburg ghost stories was asked by the Chamber of Commerce to give ghost tours to help develop Gettysburg as a heritage destination. Today, Destination Gettysburg, the tourism promotion organization for Gettysburg, explains on its website that “Dozens of teams have conducted investigations on fields, homes, and taverns; discovering spirits left behind from the Civil War and other periods. You are invited throughout the year to tour our streets, our bridges, and buildings and discover for yourself what has lingered…” Their website lists seven different ghost and paranormal tours.

Cooper-White identifies three levels of engagement with these tours: 1) a folklore or storytelling aspect that is primarily theatrical in nature; 2) a ghost hunting level to observe and experience ghostly activity; and 3) a paranormal investigation level that applies scientific methods to collect evidence of paranormal activity (Cooper-White, 37). Many of the tours stress the accuracy of their historical research and information, and Cooper-White identifies a relationship between the ghost tour community and the reenactment community in their interest in individual and personal stories.

She identifies the ghost community as “a subculture within the larger culture of middle America.” From her research in Gettysburg, she reports that:

The demographics of this group are fairly homogeneous…almost entirely white and solidly middle class, mostly middle-aged, born in the North or Midwest, and from Christian backgrounds…Some are members—mostly nominally—of Catholic or mainline Protestant churches….Many have drifted without prejudice away from institutional religion, stating that they no longer need it when they have direct knowledge of heaven, the afterlife, and God. (Cooper-White 37)

She also notes that she did not encounter evangelical or fundamentalist Christians, Jews, or other religious traditions in her research. Although she encountered few people of color in the course of her research, one African-American visitor, who she interviewed, had had numerous ghost experiences. He felt that belief in ghosts was more acceptable in his family, church, and culture than in white middle-class culture. A Native-American naturalist, whom she questioned, responded that ghost sightings were not a question, but just part of the spirituality of his culture—a natural part of life. There is evidence that many present-day Americans also share a belief in spirits. In fact, she reports that about two thirds of the participants on every ghost tour she attended raised their hands when asked if they believed in ghosts. 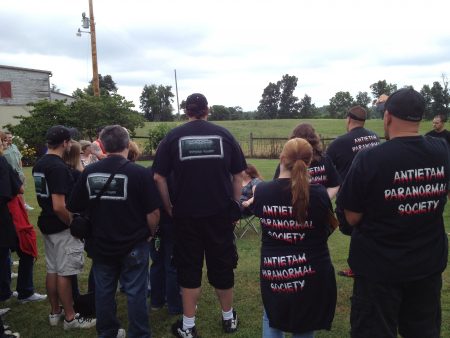 A paranormal gathering at Branalea Farm. Photo by Pamela Cooper-White.

Cooper-White set out to determine whether or not a spiritual hunger motivates ghost tour participants. While some visitors are simply drawn to the entertainment factor and dramatic presentations of history, she concludes that “many individuals come with spiritual questions, or even on a deeper level, a personal quest—for validation of their own unexplainable experiences, for the possibility of contact with a lost loved one, and for the greater certainty that there is truly life beyond death.” (Cooper-White 42)

Her research documents a spiritual component to how some Americans experience and interact with history through ghost tours and paranormal investigations. Can we still dismiss ghost tours as just a marketing fad to boost visitation, or do they represent a significant trend in how Americans relate to both religion and history? If visitors are looking for opportunities to interact with history in spiritual quests for meaning, we may need to take the popularity of ghost tours more seriously.

For more on this subject, see: