Here’s Why Your History Museum Should Get Out the Vote

Here’s Why Your History Museum Should Get Out the Vote 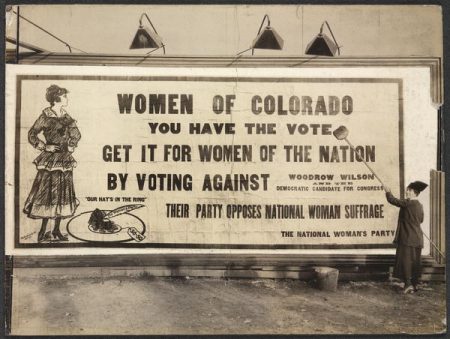 A 1916 women’s suffrage billboard. Image from the Records of the National Woman’s Party, Library of Congress.

It’s easy to see museum civic involvement as a set of extremes: take a polarizing stand or appease all sides. Many museums are finding that taking big and bold steps is the right choice for them. But others avoid taking a stand on charged issues and even avoid acting as a neutral convener. Connecting the past to today is a vital part of the way history museums educate visitors and demonstrate their own relevance, and museums do themselves a disservice when they avoid current events.

History museums looking to take a step towards community involvement should start with voter turnout, even when it’s not election season. This can range from offering voter registration forms to creating programs and exhibits that discuss issues around voting rights past and present. Voting is a modern-day issue with clear ties to all periods of American history, and it has relevance to all of your visitors. 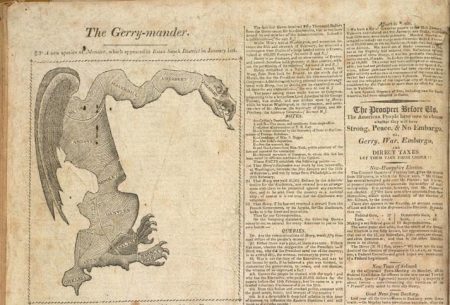 The classic 1812 satire of politically-motivated redistricting from the Boston Gazette. Image via Wikimedia Commons.

When I worked at Old South Meeting House, the site of many public meetings leading up to the American Revolution—including the meetings before the Boston Tea Party—we found that creating a content tie-in to our voter registration table was natural. The museum already discusses which members of society were welcome at public meetings and which groups were excluded. We made a sign for the voter registration table contrasting who could vote in Massachusetts in 1773 and who is eligible to vote today.

Setting up the table was simple. We provided a stack of voter registration forms and blank envelopes, and a list of each state’s election office address. Next to this we put directions to the post office down the street. Today, many states have online voter registration, so if you can use a kiosk with a computer or tablet, that may be even better. We weren’t able to track how many visitors registered to vote because we weren’t staffing the table, but we saw that the table got traffic. International visitors were also intrigued. I noticed a British family animatedly comparing voting requirements. Our state does not require voters to present photo ID, but many states do, which can be a major barrier. In a voter ID state we might have pointed visitors towards organizations that help people obtain ID.

We got our inspiration and resources from National Voter Registration Day. In some cases, they will even send voter registration volunteers to your site, if you request them. Nonprofit VOTE also offers materials for nonprofits to host registration drives and voter education activities. They have resources on being involved but nonpartisan as a 501(c)3. You can do a lot as long as you aren’t endorsing a candidate. For information about present-day issues such as redistricting, voter fraud vs. voter suppression, and different electoral systems, check out organizations such as Common Cause and VoteRiders. Many of the demographics most targeted by voter suppression are also demographics that are not well-represented in museum audiences, so offering information as part of your museum’s outreach initiatives in your community could go a long way as well. 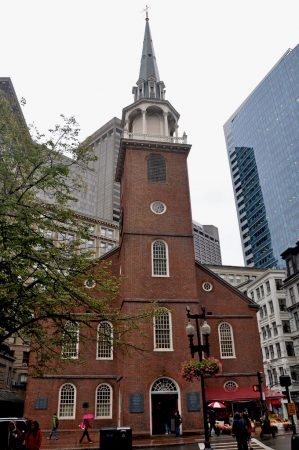 If your museum talks about politicians in your town’s past, you’re already talking about elections. How many votes did that well-known 20th-century mayor win by? A museum that covers city planning or growth can dovetail that discussion with one about how political districts are drawn and redrawn. Any museum that commemorates a person or group who couldn’t vote in their lifetime or faced nearly-insurmountable barriers to voting has a natural connection to the subject, whether it’s the home of an early American heiress or an exhibit about the Harlem Renaissance.

Free elections are a part of our national heritage and, at its core, voting is a non-partisan topic. Museums that want to start their civic involvement on the cautious side can do so with voter turnout, while museums ready to take a stand can tackle issues of justice, discrimination, and structural inequity in access to the vote.

Museums are starting to ask their audiences to speak up when the NEH, IMLS, or a local Community Preservation Act is in question, but only some will. 45% of adult Americans did not vote in the 2016 presidential election. For our own sake and that of our communities, we need to make sure our audiences are engaged in civic life. Whether you’re educating already active citizens about modern voter suppression or just signing people up to vote, museums can make this issue their own.

Want to write for the AASLH blog? Learn more and submit and article here.